Controversy over Kim Kardashian‘s latest nude editorial has quite a few fashion panties in a bunch. The concept, a clear re-creation of the 1970’s shoot featuring Carolina Beaumont, Paper Magazine was specifically looking to raise brows and generate headlines. Why of course…because sex sells and the goal IS to SELL magazines, right?!

According to editors at Paper Mag, the issue is an art project where they explore, deconstruct, and obsess over the theme of attention. They reference Kim as a ‘Hyper-Pop-Culture-Icon-Institution,’ and go on to say that “the images inside….is…holy fucking shit.” …and the best part, “If you don’t like it, post that too. It will only make us more famous.” It all just seems so on the surface. Let’s do something crazy to get people talking and sell a shit load of magazines! The issues are deeper than that and you would think that Kim’s handler, I mean hubby/Kanye, would disapprove.

Let’s examine the original editorial concept, which was shot by French photographer Jean-Paul Goude. You know the guy who is known as a legend, but gets a hard on through objectifying and exoticizing the bodies of black women. Yes, him! He jokes about his fascination, likes to distort their body parts (even before PhotoShop was invented), and refers to himself as having, “Jungle” Fever. Writer Janelle Hobson breaks it down so eloquently in her book, Venus in the Dark (via Styleite):

“The subject wears an ‘exotic’ hairstyle and ‘smiles’ for the camera in the pose of a ‘happy savage pleased to serve,’” she says, “which suggests her complicity in having her body depicted as a literal object, a ‘primitive’ vision to provide pornographic pleasure and intoxication presumably for a white male spectator.”

“Kim, on the other hand, wears a sequin designer gown and expensive jewelry. She’s not here to serve.” She’s here to collect a check, blinded so much by the number of zeros, she failed to do proper research.

It is worth noting that on the cover of one of Goude’s books, Grace Jones is featured in a cage, naked and surrounded by raw meat. The sign above the cage reads “DO NOT FEED THE ANIMAL.” Even worse, the cage is on a stage with spectators watching like she is at a zoo! Now fast forward to Amber Rose’s Complex Magazine shoot! These are the types of images we see of Black women, celebrities, and fashion models in our magazines. It is bad enough that we do not receive a fair share of editorial and runway exposure, but when we do, we are seen as animalistic, exotic, and sometimes grotesque. “The industry’s general unwillingness to embrace models of color as anything besides the exoticized “other” is thwarting the development and popularization of other kinds of black beauty.” {via Jezebel Magazine} 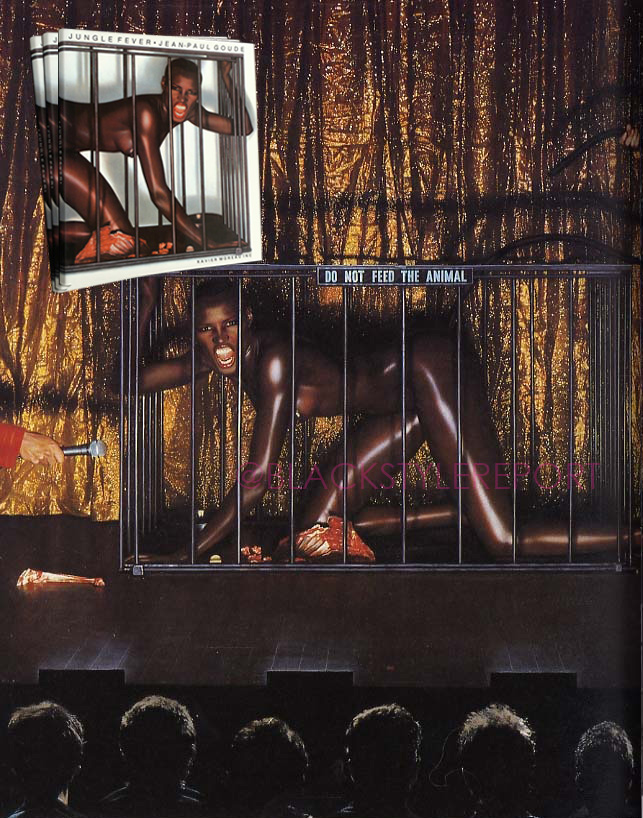 Fashionistas LIVE for high fashion editorials and love to read about the inspiration and thought process behind them. This concept; however is deeply rooted in the dark, primitive, and distorted imagery of Jean-Paul, who once said, “I had always admired black women’s backsides, the ones who look like racehorses.”  {That’s disrespectful, but now visualize all of the Kim K memes on Instagram with a horse’s ‘backside’ photoshopped into the image. Coincidence?}

With that said, Kim’s body {most notably her ass} which has been surgically altered to look more like the shape of a Black woman, is poised butt naked for the sake of “art” and she is unapologetically paid millions of dollars for it. So as we debate about race issues, the fact that she is a new mom and wife, or even that she has built an empire on a sex tape with Brandy’s brother, Paper Magazine is selling magazines and Kim is laughing all the way to the bank!

“And they say I didn’t have a talent…try balancing a champagne glass on your ass. LOL” 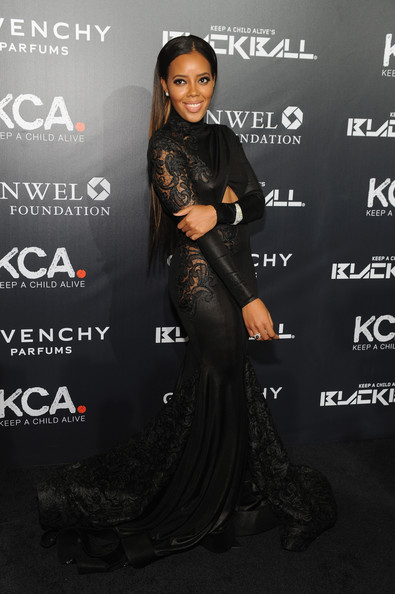 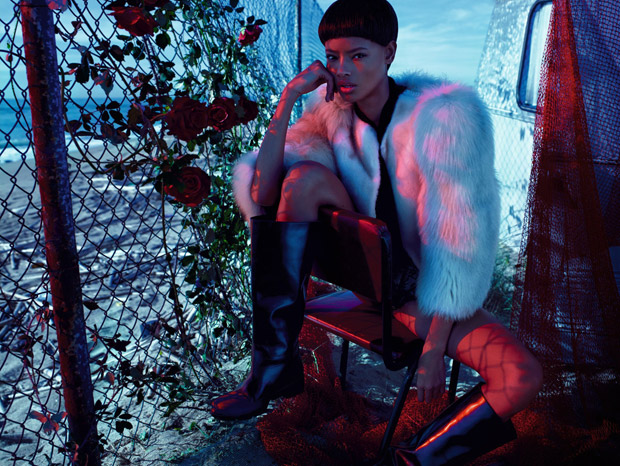 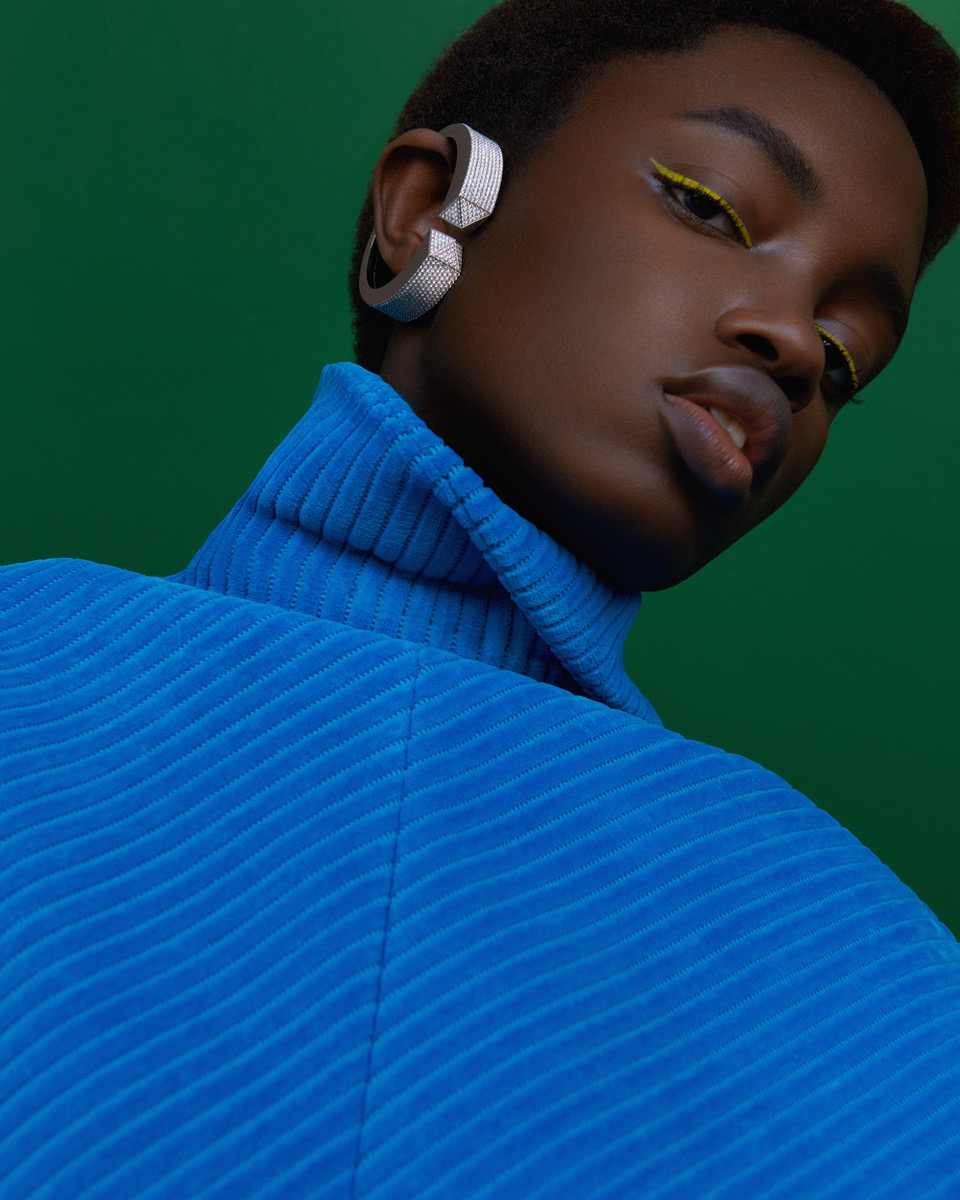