Kerby Jean-Raymond, the innovative designer behind Pyer Moss, the cult sportswear brand for men, has changed the game with a new “menswear for women” collection that challenges racism and police brutality in America. During New York Fashion Week, Jean-Raymond showcased a stellar and thought-provoking presentation that left buyers and press speechless, yet hungry for change.

“For as long as I have this platform and for as long as people are going to listen to me — I’m going to take a stand on something and this is something that is important to me. If one person walks out of here today and is just nicer, or gives an opportunity… there are so many influential people in that room upstairs. If one person decides that I’m going to give a black kid a job now because the narrative I’ve been seeing on TV of him being a thug may or may not be true, I did my job. I changed one life and one life might change another life — and that’s how the world changes. Little by little.”   ~ Kerby Jean-Raymond {As quoted to Huffington Post}

Upon learning that Jean-Raymond’s show would be used as a platform for activism, his venue suddenly canceled at the last minute and he lost buyers in the process. Editors were angry and opposed to being seated in the second and third rows, behind the families of victims. Industry politics at its best. The designer still pressed on, knowing that no matter how successful he became or how much money he made, he will always just be a Black man in America. Memories of his own experiences from unprovoked excessive force and the standard NYC “stop and frisk” harassment (over a dozen by the age of 18) gave him the drive to stay encouraged. 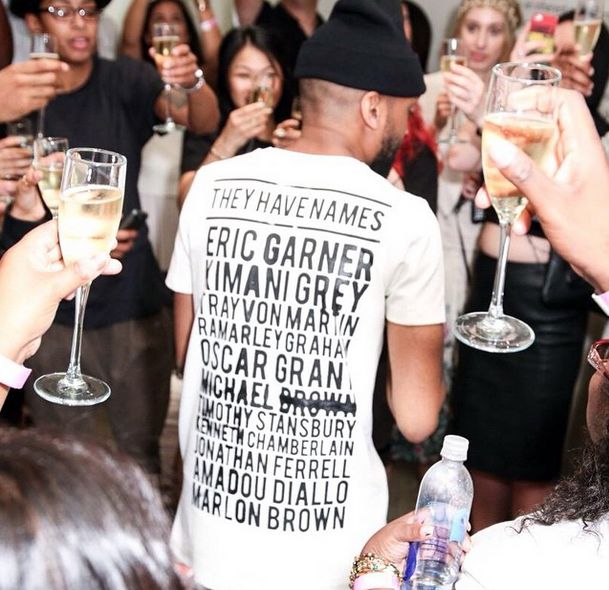 Prior to the runway show, the designer (who wore a custom “They Have Names t-shirt) played a 12-15 minute film appropriately named “Ota, meet Saartjie,” after Ota Benga (a Congolese man put on an exhibit at the Bronx Zoo in 1906) and Saartjie “Sarah” Baartman (an African woman also exhibited as a zoo attraction for her body and large buttucks in Europe in the early 1800’s). The film was riveting and included real footage of police officers using excessive force as well as interviews from activists, fashion industry movers and shakers, and various family members of  African-American men who were killed by the police, including Sean Bell, Oscar Grant, and Eric Garner. The end of the video gave viewers a simple call to action, “For more information and insight, open your eyes!” 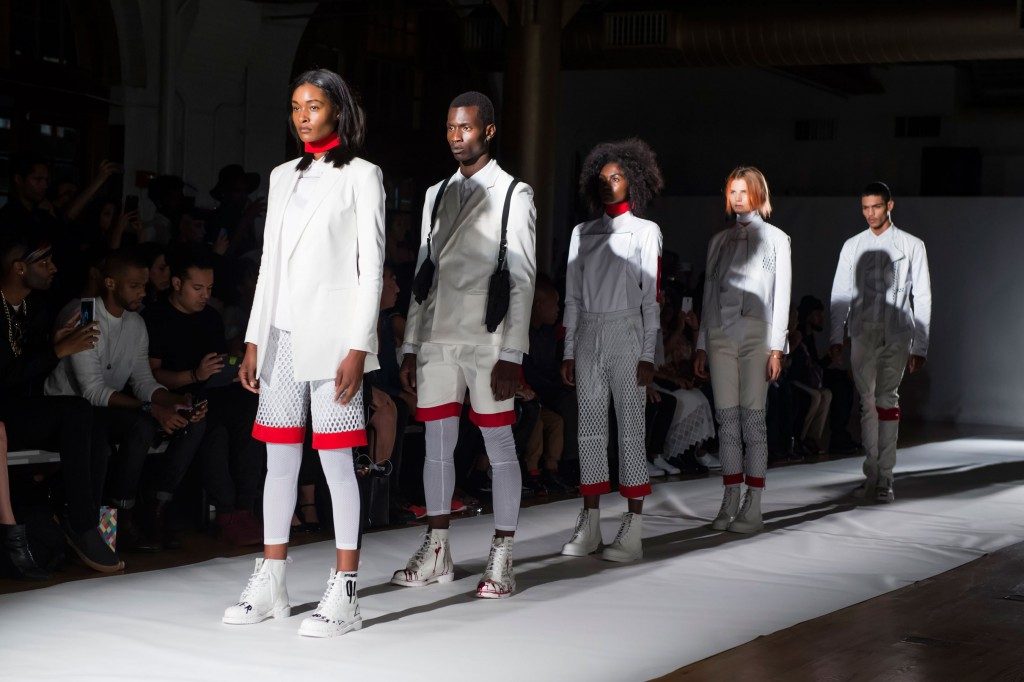 Soon, the voice of KRS-One came blazing through the audio system, full of aggression screaming “Woop Woop, that’s the Sound of Da Police” and  the “Black Lives Matter inspired” sportswear collection became the center of attention. As models marched down the runway, guests watched in awe as they gasped quietly at garments that featured key “movement” phrases (such as Breathe aka “I Can’t Breathe”), red spray paint symbolizing blood, and the names of those recently killed were written all over the white Dr. Marten boots. I now have a new level of respect for the Pyer Moss collection and love everything that it is standing for! This was a bold and brave move for a designer so young in the game. We have to be the change that we want to see and this was a great statement to the leaders within the white-washed world we call fashion! I am happy with the outcome and impressed with the direction of the show. It was super dope! It was moving, inspiring and so on time! #BlackLivesMatter

“Love yourself and your expression, you can’t go wrong.” ~ KRS One {1st Quarter}